Deep learning is a powerful machine learning technique. These are widely used in

What is Deep Learning?

In this video, neural network structure has been explained very clearly. I recommend that you watch these 7 part videos.
I used the same notations for representation. 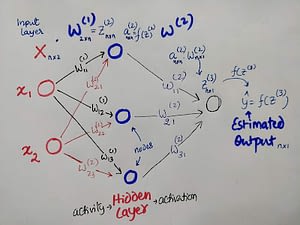 In the above notation: There are two independent variables (x1and x2). If we represent these data in a matrix form (X), then order of X will be of n×2.

W(1) represents the weights before the first layer. Weights are model parameters, (not hyperparemeters unlike number of nodes or number of layers). At each node, the product of input values and weights are summed. In matrix notation, Z(2)= X.W(1). Z(2) represents matrix comprising of sum of products. These are also referred to as the activity.

W(2) represents the weights after the first layer. The same process is repeated here too. Finally we get Z(3) which is the product of matrices a(2)and W(2). Dimension of the resulting matrix will be n×1.

Again this matrix Z(3) will be transformed using activation function to get the final predicted output which will also be of the order n×1. That is ŷ = f(Z(3)). Since there are n observations, there will be n predicted outputs (hence the order: n×1).

Can you find out the final output values for the following example?

In the input nodes, I have written the values of the first observation i.e. x1=1 and x2= 2. Compute the product of the input values and the weights and sum these values at each node. Use identity activation function (i.e. no transformations).

Main purpose here is to get the prediction/output so that we can calculate the error as we already know the real value of the output in training set.

To estimate the gradient (slope of the loss function with respect to weights) in order to optimize the weights which minimize loss function.

In this post, we have explored the basic concepts and structure of deep learning models.